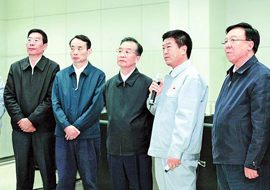 Wen Jiabao, member of the Standing Committee of the Political Bureau of the CPC Central Committee and Premier of the State Council, Zhang Ping, Director of the National Development and Reform Commission and Xie Fuzhan, Director of the Research Office of the State Council, accompanied the afternoon of October 17 and paid a visit to the Lanzhou Petrochemical Company of China National Petroleum Corporation. They visited the staff of the State Council and affirmed that they were The petrochemical industry of the Republic made a major contribution to the development of the industry. Emphasis is placed on breaking through major key technologies, focusing on changes in the market, adapting to market demands, paying special attention to saving energy and reducing consumption, and providing guarantees for national economic and social development.

At 17:00, accompanied by Gansu Provincial Party Secretary Lu Hao and Governor of Gansu Province Xu Shousheng, Premier Wen Jiabao and his party came to Lanzhou Petrochemical Company's ethylene plant. At the gate, General Manager Jiang Jiemin of China National Petroleum Corporation and General Manager of Lanzhou Petrochemical Company Chang Wei and Party Secretary Li Zhenghua shook hands. Subsequently, Wen Jiabao and his party drove to inspect the ethylene plant area. On the way, Jiang Jiemin and Xuan Changwei introduced the construction of the 460,000-ton ethylene project and the introduction of technology, focusing on the independent innovation of ethylene core technology and the localization of the compressor. Wen Jiabao listened carefully and nodded from time to time.

In front of the joint control room of the ethylene plant, Premier Wen Jiabao shook hands and greetings with the staff who came forward. The Prime Minister walked into the unit's joint control room, and the operators who stick to the production post applaud the arrival of the prime minister. Wen Jiabao smiled and greeted everyone. Before the big screen of the main control room, Xuan Changwei introduced the extraordinary development history of Lanzhou Petrochemical, which has the reputation of â€œthe cradle of the petrochemical industryâ€, as well as the transformation of development methods, the focus on independent innovation, the promotion of energy saving and emission reduction, and the strengthening of basic management. Perform social responsibility and other work. Wen Jiabao asked about the situation of synthetic rubber production. Jiang Jiemin introduced the development status of the synthetic rubber industry at home and abroad, and the production capacity and technical level of Lanzhou Petrochemical. After listening to the Prime Minister, he nodded and expressed his appreciation.

Lanzhou Petrochemical Company overcame the impact of the international financial crisis this year and went against the trend to carry out benchmarking management and vigorously carry out technical and economic indicators. Hearing about the introduction of operating income, profits, and the realization of taxes and fees paid during the first nine months of this year, Wen Jiabao caredly asked: â€œHow is the situation between this year and last year?â€ Were Wen Jiabao grinning, when it was learned that there was a substantial increase from last year? . He was very concerned about the lives of employees and asked with concern about the transformation of shantytowns. I heard that Lanzhou Petrochemical invested capital in the construction of a new residential area, increased the implementation of the renovation of dilapidated buildings and shanty towns, and placed 14,000 residents. Wen Jiabao nodded frequently.

Then, Jiang Jiemin briefed Premier Wen Jiabao on the overall work of CNPC and the status of enterprises in Gansu Province and Lanzhou City, oil and gas refining and production, main business income, and contribution to local economic and social development. Wen Jiabao praised him: â€œIt has made a great contribution to the country.â€ Jiang Jiemin reported on the four priorities that PetroChina must pay attention to next year: First, it should continue to do a good job in domestic oil and gas exploration, increase reserves, and lay a solid foundation for resources. The second is to strengthen cooperation in overseas oil and gas business. Third, vigorously adjust the structure, focus on technological innovation, speed up the transformation of development methods, and strive to improve energy development and processing efficiency. The fourth is to speed up the construction of the downstream market, ensure oil and gas supply, and make contributions to the adjustment of the primary energy structure. The Prime Minister smiled after listening to a satisfied smile.

After hearing the report, Wen Jiabao delivered an important speech in the control room. He said that today is my first visit to Lanzhou Petrochemical and I would like to take this opportunity to extend greetings to Lanzhou Petrochemicalâ€™s cadres and employees. Wen Jiabao pointed out that the original Lan Lianhua and Lan Hua made great contributions to the country and wrote a glorious chapter in the history of the Republic's oil refining and chemical industry. Now that Lanzhou Petrochemical has more than 30,000 people, it has a very good technical foundation and talent base. It is the result of continuous efforts of several generations of people in the last half century. In responding to the international financial crisis, from Lanzhou Petrochemical to PetroChina, we conquer the situation, overcome difficulties, and successfully completed our tasks. Such achievements are hard to come by. PetroChina's affiliated companies not only contributed to the country, but also maintained stable production and gradually improved the living conditions of employees.

Wen Jiabao stressed that China's top ten industry restructuring and revitalization plan, oil refining and chemical industry is the key, because the oil industry has always been a pillar industry in China's industry. Including the formulation of the "Twelfth Five-Year Plan", it is necessary to make an overall plan for the overall development direction of petroleum refining and refining, including scale, benefits, and technology. In particular, the refining and use of oil should focus on energy conservation and consumption reduction. Oil must safeguard the development of the national economy. On the basis of saving energy and reducing consumption, petroleum should strive to open up a vast space for international cooperation, lay a good foundation for future development, and ensure the country's social and economic development. The refining and chemical system must break through key technologies. Regardless of whether a new factory or an old one is being reconstructed, we must focus on breaking key technologies and applying new technologies. We believe that our technical personnel have this capability. We must pay attention to the changes in both domestic and foreign markets, promote industry and industrial development while preventing overcapacity, and strive to adapt petrochemical enterprises to the needs of the market, and strive to achieve the maximum benefit. This is the adjustment and revitalization plan and the â€œTwelfth Five-Year Planâ€. Overall considerations.

Wen Jiabao emphasized: â€œWhat I care about most are two things. One is the breakthrough of major key technologies. The other is to focus on the market. If you add a little more, it is to pay special attention to saving energy and reducing consumption, including environmental protection and pollution prevention. He added that several oil and gas projects were introduced from west to east, Lanzhou was a central hub, coupled with Lanzhou Petrochemical's decades of foundation, new experience and technology, potential for development, and future overall layout. Take full account of the characteristics and advantages of Lanzhou.

After listening to the Prime Minister's speech, the cadres and staff present at the meeting were encouraged. Jiang Jiemin said: â€œToday, the Prime Minister represented the Central Committee of the Party and the State Council to visit Lanzhou Petrochemical to visit more than 30,000 employees of Lanzhou Petrochemical and also care and love of the millions of employees of PetroChina. The Prime Minister gave us new hope and instructions. And we demand that we absolutely not live up to the expectations of the Prime Minister, and we must definitely manage China Petroleum's affairs well, perform its 'three major responsibilities', and make new and greater contributions to China's economic development and energy supply.â€ The staff of the cadres asked in a loud voice: â€œDo you have any confidence?â€ answered in unison on the spot: â€œYes!â€

Before leaving Lanzhou Petrochemical, Wen Jiabao offered to pose for a photo with all the comrades at the scene. The presence of cadres and staff left a memorable moment. Prior to his departure, the Prime Minister cordially said: "The cadres and workers of the Lanzhou petrochemical system have made significant contributions to the development of the petrochemical industry of the Republic for more than half a century. The party and the government and the people throughout the country thank you!"

At 17:50, Wen Jiabao waved goodbye to everyone and drove away from Lanzhou Petrochemical.