On April 17, Chinaâ€™s auto industry shares were officially demarcated on the time limit. It is understood that the auto industry will limit the number of shares to be restricted by category. In 2018, the foreign share ratio of special vehicles and new energy vehicles will be abolished; The ratio of foreign-invested shares of commercial vehicles is limited; in 2022, the foreign-invested-to-equity ratio of passenger cars was lifted, and the restrictions on the number of joint ventures not exceeding two were abolished.

Through the 5-year transitional period, the auto industry will completely cancel the share-ratio restriction. The Chinese auto market will be completely dominated by the market. The relevant personages have judged that the stock ratio liberalization will benefit Chinaâ€™s auto technology in the context of the improvement of the efficiency and scale of the Chinese auto industry. To further enhance and attract foreign-funded enterprises to gradually hold more shares of enterprises in China, it will help to inspire more advanced technologies to integrate with Chinese companies. Driven by the scale, efficiency, and technology, foreign-funded enterprises will cooperate with Chinese companies in the process of future marketization even if they do not require share ratios.

Manufacturing industry is the earliest field of our country's opening up, and it is also the most full field of market competition. As the most important component of the manufacturing industry, the opening of the automotive industry is also gradually being implemented. From 2016, no more than two restrictions on the number of joint ventures have been eliminated and the issue of shareholding ratio liberalization has been proposed. In the "Foreign Investment Industry Guidance Catalogue (Revised in 2017)" promulgated by the National Development and Reform Commission and the Ministry of Commerce, the restrictions on the ratio of auto electronics and power batteries and the relaxation of restrictions on joint ventures of pure electric vehicles have been removed.

Then, what kind of impact will the auto industry have on the auto industry when it is implemented in different types of transitions during the transition period? How will the use of car stocks after 5 years be released will have an impact on the Chinese passenger car market?

However, industry experts pointed out that the qualification review is necessary, especially for foreign-funded wholly foreign-owned enterprises investing in new energy companies, but as the company's stock ratio is released, more and more foreign-invested new energy auto companies The Chinese new energy vehicle market will be entered into solely by capital, and the binding force of the new energy permit will be smaller and smaller.

Commercial vehicles may come out of the joint venture

Taking heavy trucks as an example, the mainstream brands in the commercial vehicle market are FAW, Dongfeng, Futian, China Heavy Vehicle, Shaanxi Automobile, and SAIC Iveco Hongyan. Of these six companies, only SAIC Iveco Hongyan is a joint venture. Industry experts pointed out that the expensive selling price has become an important reason for the joint venture's defeat in the commercial vehicle market.

According to the commitments made by the NDRC, from 2018 to 2022, China's auto industry will be phased open for five years. Finally, by 2022, the foreign-invested equity ratio of passenger cars will be lifted, and at the same time, no more than two joint-venture companies will be removed. This will again be a disruptive influence on the Chinese auto industry. Specifically there are at least eight of the following:

First, the decline in car prices

For current Chinese consumers, self-owned brands are the representatives of cost-effectiveness. The reason why such distinctive features are largely localized advantages of spare parts. With the opening of the JV ratio, the production costs of foreign companies will also be further reduced, which will directly lead to lower prices. This will create a price retreat mechanism for independent brands.

In addition, due to the drop in production costs of foreign-invested auto companies, and even more cost-effective products entering the World Bank of Chinaâ€™s auto industry, the â€œcar priceâ€ phenomenon will once again appear in the passenger car market five years later. Foreign-funded auto companies and independent brands will become the scene. The main opponent of the "price war".

With the new foreign energy, commercial vehicles, and passenger cars, the foreign-capital-share limit has gradually been lifted, and no more than two joint-venture restrictions have been lifted. To a certain extent, it will stimulate the development of automotive companies. As Chinaâ€™s largest auto market, Chinaâ€™s demand for models remains high. In China, foreign car makers are bound to further carry out more models and increase product competition in China.

After the auto industry's joint venture shares are released, with the further increase in the types of automotive products, foreign companies will bring excellent products to Chinese production, which will promote the further improvement of China's spare parts manufacturing and manufacturing. On the other hand, self-owned brand car companies have strong learning capabilities, and self-owned brands will accelerate their own sales through the joint venture brand.

The number of joint venture stocks is more liberal than that of joint venture automakers in China. These provisions will directly have a positive impact on the SAIC Audi project that has been on hold for one year. As early as November 2016, SAIC officially announced that it had signed a contract with Germany's Volkswagen. The two parties will establish a joint venture company to manufacture and sell Audi brand cars. Once this move was disclosed, it was immediately boycotted by 30 FAW-Volkswagen Audi dealers. This SAIC Audi project is stranded.

According to the â€œSanya Statementâ€ signed by both parties, the SAIC Audi project must be suspended until the annual sales target of 1 million Audi. Finally, Audi reached an agreement with FAW-Volkswagen Audi dealers to ensure sales of 900,000 units by 2022. SAIC Audi did not sell in China in January 2022.

Coincidentally, the National Development and Reform Commission announced a timetable for the full opening of the Chinese automotive industry in 2022. According to recent reports, the SAIC Audi project is about to restart. In terms of personnel, the personnel of Volkswagen China in SAIC Volkswagen has been put in place. In addition, Audi official website also issued a statement saying that it is discussing with SAIC on future cooperation.

At present, the issue of the advantages and disadvantages of the joint venture stocks compared with the opening is still the focus of industry disputes. Some commentators pointed out that with the opening of the joint venture stock ratio, the foreignerâ€™s right to speak will also be enhanced. Currently, in the passenger vehicle market, the market share of the joint venture brand is approximately 60%, and the opening of the share ratio is also wholly foreign-owned. The car manufacturer's production offers possibilities. This will challenge the cost-effectiveness of China's own brands, and it is indeed a key opportunity and challenge for independent brands.

According to incomplete statistics, there are no less than 100 car brands in China. The level of development of these auto companies is even more uneven, but because it is a pillar industry, local governments also provide transfusion support. In recent years, the number of zombie car companies that have been exposed has been reported frequently. With the opening of the joint venture stock market, the development of foreign car companies in China will also be further lifted. This will create a "fish effect" for Chinese cars. The competition in the domestic auto market will be fiercer, the outstanding self-owned brands will become more and more outstanding, and the development space for the backward-developed auto enterprises will be further squeezed. This will eventually promote the development of the auto industry in China.

Compared with foreign-invested automotive products, Chinaâ€™s autos have not had a gap in terms of intelligence and network connectivity, and even surpassed foreign investment in certain areas. Contrary to the concern that Chinese autos lose their right to speak in the opening of shares, many Senior industry professionals believe that this is an opportunity for independent brands to truly participate in competition. The limitation of the ratio of joint stocks prior to the protection of the independent brands has also become limited, the opening of the joint venture ratio, foreign car prices may also be China's car companies intelligent, networked characteristics of guidance.

VIII. Accelerating the flow of talented people, or the loss of talents in state-owned auto companies

Whether in the areas of new energy, commercial vehicles or passenger vehicles, the liberalization of share ratio will inevitably attract foreign companies to enter the Chinese auto market, and talent will become one of the important resources for foreign companies, joint ventures and independent enterprises to compete for. For the talents of state-owned auto companies, more attractive foreign-funded enterprises and independent enterprises will become new gathering places. In other words, stock ratio opening will accelerate the flow of talents. More competitive foreign capital and autonomous automobile companies will attract more qualified car talents.

Round separator,also known as Vibrating Sifter,vibrating filter,Vibrating Sieve,vibro sifter,rotary sifter, uses vibration motor as the source of vibration,equipped eccentric hammer on the both sides of motor,the rotation of hammers change circumrotate to level ,upright and incline movement,then pass these three movement to surface of the screen mesh. Adjust the phasic angle of the top hammer and bottom hammer to change the movement track of the material. This will help to screen different materiel in different situation successfully.

Feature
The machine screening accuracy exceeds 90%.
It adopts whole sealing structure design,the sealed effect is fairly well,no dust pollution,no leaking liquid,  no material left in machine,and no dead angle in the net frame.
Small volume and light weight,easy to be installed and maintained.
The outlet can be adjusted at any angle,and it is easy to change the screen.
The rubber ball device can reduce the chance of jam on the screen.
By adding the Ultrasonic Instrument Conversion device, superfine materials up to 600 mesh can be  sieved.
Self cleaning device:silicone ball,rotary silicone brush,ultrasonic device and pneumatic device.
Automatic feeding system
Transparent plastic cover or sight glass window
Round separator in other designs are also available such as low profile design, double motor  structure, avalanche design, high frequency design etc.

waranty
Our machines have an automatic 12 months guarantee against faulty material and workmanship valid from the date of dispatch in China or date of arrival at foreign border.
If any problem of the machine under instruction within one year,we are responsible for replacement incuding delivery fee and maintenance.


Lifelong service is offered with cost charge after one year. 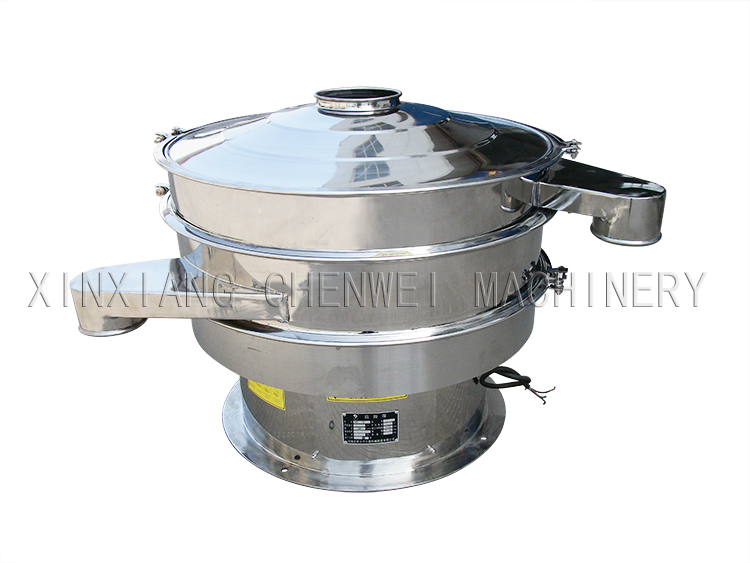