"It can achieve both lithium ion density and fast charge. This is like repairing the city high speed to alleviate traffic congestion. 'Fast ion ring' graphite is this mechanism. We have hundreds of millions of shipments on mobile phones, reliable. Sex has been verified." Wang Shengwei is introduced.

Lithium iron phosphate is not suitable for fast charging?

He pointed out that the current cycle performance of lithium iron phosphate fast-charged batteries is better than that of uncharged batteries. In principle, there is no contradiction between cycle performance and charging. Then why is it not good to use a fast charge cycle for a conventional battery? That's because the traditional battery is not designed for fast charge. When it is fast charged, there will be by-products or side reactions. After more side reactions, the cycle will naturally deteriorate. Once the dynamics of the fast charge is resolved, its cycle will not at least deteriorate. At the same time, the fast charge battery is not only high in dynamics, but also because the energy density is lower than that of the non-fast charge, the energy density is low, the electrolyte is much, and the cycle becomes better. In fact, they currently develop lithium iron phosphate fast rechargeable batteries can reach 10,000 cycles.

Similarly, the battery also needs to avoid the effects of high temperatures because it has a redox reaction itself, and the higher the temperature, the more intense the reaction. In this regard, CATL's solution is to use a low voltage system of 3.65V, which has weak positive electrode oxidation, less side reactions and slower speed. There is also water cooling control temperature to avoid high temperature conditions.

In terms of â€œlonger cruising rangeâ€, CATL's technical plan is to achieve 300 watt-hours per kilogram of battery energy density before 2020. After 2025, there is a plan to further increase energy density. In terms of "shorter charging time", CATL is already developing a fast-charged battery with an energy density of 190Wh/kg for 15 minutes. The battery is expected to have mass production capacity in 2018, and its main application field is passenger cars.

"For the high energy density fast charging battery of the car, we have the technical reserve advantage, and the domestic battery companies have the opportunity to lead the Japanese and South Korea." Wang Shengwei said, "In terms of charging speed, the charging of ordinary cars is basically Below 1C, it will be charged to 80% for nearly 50 minutes. Our products can be charged 80% in 12 minutes, and the charging speed has a sharp contrast. Even for heavy-duty heavy user taxis, full charge twice a day, one It is necessary to charge 700 times a year. According to the taxi's use period of 4 years or so, 2800 times of charging should be enough. The cycle of our high-energy fast-battery battery is expected to be more than 3,000 times, which should meet the needs of passenger car Applications. .

ThermicTransfer has 14 years of experience in R&D and production of engine radiators. The long-term cooperation engine brands are Yanmar/Cummins/Deutz/Perkins/Kubota/Isuzu/Mitsubishi/MTU. Our experience is based on the engine power provided by the purchaser. Performance curve, single heat dissipation or multiple combined heat dissipation requirements, we simulate the calculation of heat dissipation requirements, and design a three-dimensional cooler solution according to the engine size combined with the installation environment, provide customers with three-dimensional model confirmation, and provide performance parameter reports through simulation calculation. Finally, according to the customer's suggestion to adjust and optimize, form an effective program. We will then provide samples for performance testing, mass production through long-term performance, stress testing, resistance testing, etc.

At present, we design up to 5 combined Heat Exchangers for construction machinery, including two oil coolers, water cooler, Intercooler, and fuel heat exchanger. 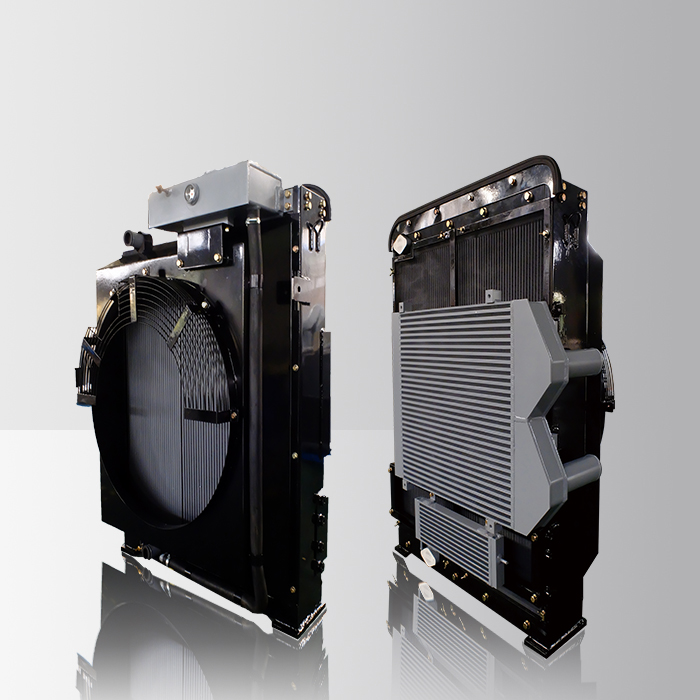