Skip to content
February 21, 2020
Study on Energy Gain of Cylindrical Heat Absorber Vacuum Tube Collector on South Facade of Building
Core Tip: The installation of solar collectors on the south facade and roof (flat roofs and pitched roofs) of buildings is one of the ways in which solar installations are integrated with buildings. Studying the energy gains of solar collectors on the south facade of a building is of great significance for building design, collector design, and predicting the energy that collectors can collect.

The concept of solar irradiation intensity and energy gain factor gives the measurement results of the relative solar irradiation intensity at a certain point on a cylindrical heat absorption plate. The energy gains of three different types of endothermic surfaces in a vacuum tube with a single north-south axis and an east-west axis were studied. The relationship between the center distance of the vacuum tube collector tube and the energy gain of the cylindrical and cylindrical heat-absorbing surface placed in the north-south direction was studied. The energy benefits of a single vacuum tube on the south facade were studied.

In this paper, the relation between the center distance and the energy yield of the cylindrical heat-absorbing surface vacuum tube collector on the south facade of the building is described. That is to say, the single-tube vacuum collector tube with a cylindrical endothermic surface is under certain conditions. The effects of energy interception on the mutual benefits of energy harvesting, annual energy gain, and collector vacuum tubes consisting of vacuum tubes are investigated.

In this paper, the relationship between the daily and annual energy gain under a certain condition and the relationship between the center distance of the collector tube and the energy gain of a vacuum tube collector with a diameter of 100 nm in a cylindrical tube with a heat-absorbing coating in a glass tube is performed. A small heat absorber can be considered to have almost the same intensity of solar radiation.

Although part of the light passes through the inner wall of the glass tube and is no longer parallel to the incident light, it is assumed that the sun light does not change its direction after passing through the glass cover tube in order not to make the calculation too complicated.

This article uses the coordinate system and the defined angles that describe the positional relationship of the sun with respect to the inclined plane. Based on the definition and assumptions, the energy return factor of a single vacuum tube and a vacuum tube collector can be calculated. In the text, D is the diameter of the glass tube of vacuum heat collection tube.

In order to use a unified method for calculation and comparison work, the sunny radiation model proposed by Jordan is used in this paper. 171. In sunny days, direct radiation has the greatest impact on the energy gain of collector pipes of different installation methods; if it is cloudy, it is due to the sky. The diffuse radiation is isotropic. At this time, the diffuse radiation has little effect on the energy gain of the collector tube of different installation methods.

Wide applicability of the model, low and out of the wet areas are in good agreement, but high and dry out of the region, its value is usually 10 to 2% higher. In this paper, the North out of 90 * 40 tilt toward the positive The relationship between the tube center distance of solar collectors and the annual changes in the daily energy yield is studied. Only the energy gain of the direct radiation is considered in the calculation, and only when the light enters the angle 0*, does it begin to accumulate heat.

The annual energy gain per unit length vacuum collector tube is the sum of daily energy returns for the whole year.

The energy gains of the two elevations and the winter solstice of the vertical riser and the horizontal tube collector in the south elevation are basically the same, and there is a big difference in the energy return during the summer solstice. The energy gain of the vertical tube collector on the summer solstice day is obviously too low, and the south facade 1 picture! 202 gives the fractional day (80) toe lateral heat gain of kiln is 14 times that of vertical pipe ki.net It can be seen that due to the influence of adjacent vacuum tube blockage, the vacuum tube collection in the collector of different tube center distance The instantaneous energy gain is different. The influence of the vertical eclipse of the south vertical facade is mainly caused by the absence of shelter at the noon during the day when there is no sun on the day of sunrise, and the long time of impact from the center of the pipe to the hour. The influence of tube center distance on the energy yield in the summer solstice day of the south facade is not obvious because the total energy yield is relatively low. The effect of center distance between the tubes in the spring and autumn on the energy yield is significant, and the distance between the tube center and the center in winter is of the energy return. The impact is not significant, mainly due to the small change in the solar azimuth in winter.

The influence of adjacent vacuum tube shielding on the two-day and winter solstice of the southern facade horizontal collector has little effect on energy yield. Obstruction effect mainly occurs when the solar altitude angle at the midday is relatively large. The effect of summer distance on the solar summer solstice day in summer is particularly obvious. The distance between the center of the large collector tube is an effective measure for the summer large energy gain.

On the vernal equinox day, summer solstice day, equinox day, and winter solstice day-to-date facade, the collector is unitized in time. The instantaneous energy gain of the vacuum collector tube is the distance between the center of zinc and the center distance of i/D b. The transverse south face is erected and tapped. when the length of the vacuum unit 24 is changed from the center of the tube with the energy output is given and the south facade facing transverse vertical collector 40 degrees off center distance * changes, it can be seen placed in the transverse collector summer The energy gain per unit day in the vacuum tube 1a of unit length has significant effect on increasing the energy yield with the center distance of the large tube in the tube, but the effect of the vertical collector is not obvious. South Facade Transverse Collector Summer Energy Gathering Clear Collector Equilibrium

Working Method:
This machine is of horizontal crushing structure. The material is fed into the crushing chamber through a hopper, crushed by cutting and impact of both fixed and rotating knives, and flows into the exit automatically under the effect rotating centrifugal force. Designed according to GMP standard and wholly made of stainless steel, this machine has simple structure, convenient cleaning and low noise, being the ideal equipment for coarse crushing. 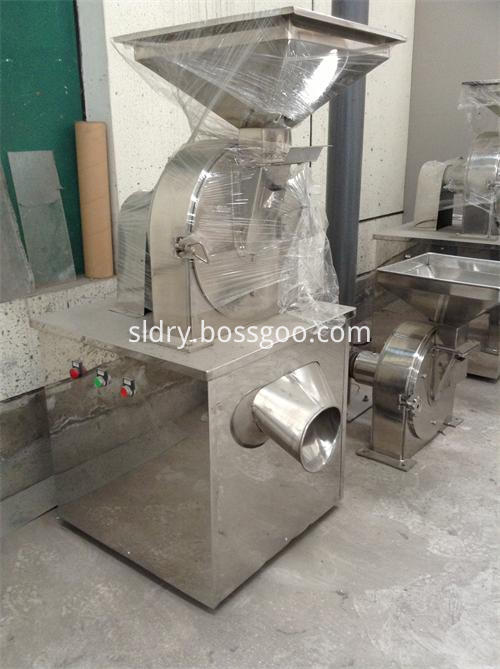