At the end of 2014, Linde Hydraulics (China) Co., Ltd., a joint venture of Germany's Linde Hydraulics and Weichai Power Hydraulics Technology, was established in Shandong. The situation of China's high-end hydraulic core technology being monopolized by foreign countries will be changed accordingly. This change was due to an overseas merger and acquisition of Weichai Power in Germany more than two years ago.

In September 2012, Weichai Power acquired a 70% stake in Germany's Linde Hydraulics. As an important supplier in the world of hydraulics, Linde is of great importance to Weichai Power in all aspects. 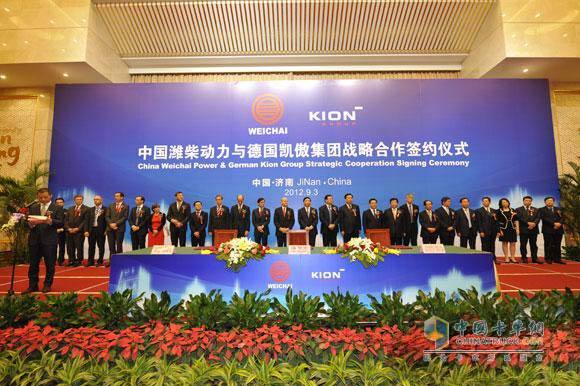 Sun Shaojun, CEO of Weichai Power Co., Ltd., told reporters: â€œIn addition to Linde Hydraulics, the worldâ€™s better hydraulic power supply is running out. It should be said that it is the last enterprise that has not been acquired or has not been integrated. â€

Linde Hydraulics Co., Ltd. and CEO of the two-company company Will said: â€œWeichai Power can bring us a lot of help, and can also give us a lot of experience about the market. At the same time, we can share more with them. client."

Germany is a world manufacturing power. â€œMade in Germanyâ€ has always been known for its durability, reliability and precision. Now the German industry, following the three revolutions of mechanization, electrification, and informationization, is starting the fourth industrial revolution represented by networking, intelligence, and green.

Hao Qinggui, deputy general manager of Weichai Power Hydraulic Technology Co., Ltd., briefed reporters: â€œIn fact, Germany has nearly 4 million small and medium-sized enterprises, and there are more than 1200 invisible (world) champions, that is, he is ranked in the industry ( The world's top three, such a status quo should be of great significance for China's equipment manufacturing industry."

Weichai Power's overseas merger and acquisition plan has been brewing for a long time. In 2009, they acquired the French Baudouin Yacht Engine Company with a history of more than 130 years. After 3 years, they acquired a 75% share of Ferretti Group, the famous yacht manufacturer. Up to now, the acquired Ferretti Group has signed 18 new yacht orders in the Asia-Pacific market with a total value of over 100 million euros.

Deeply cultivating the domestic market and aggregating global wisdom, Weichai Power has acquired technologies and markets through a series of overseas mergers and acquisitions and reorganizations to achieve product internationalization and brand globalization, and injected vitality into the company's leading position in the power market.

A Spherical bearing is composed by an inner ring with a double raceway and an outer ring with spherical surface, the outer raceway center is in accord with shaft center; all having self-aligning function, which can compensate the mounting error between the shaft and bearing seat and the outer ring inclination caused by shaft deflection. They can carry large radial load and could also support any directional axial load but not pure axial load. In particular, they are suitable for the applications with heavy load or vibration.

20000Ctype is adopting spherical symmetrical rollers, no fixed ribs on the inner ring; there are also two rows of independent solid cages. This type of bearings is especially suitable for the applications with high speed rotation.

20000CA are symmetric spherical rollers, there are fixed ribs on the center of inner ring, the solid cage is integrated. This type of bearings is widely applied and especially for applications with heavy load.

The tolerance of spherical roller bearings is class 0 and class 6. The tolerance value is available in section Rolling Bearing Tolerance.

Radial clearance of Spherical Roller Bearing is listed in Table 2 and 3.

e, Y1,Y2 factors can be found in the table of bearing dimension

Y0 factors can be found in the table of bearing dimension