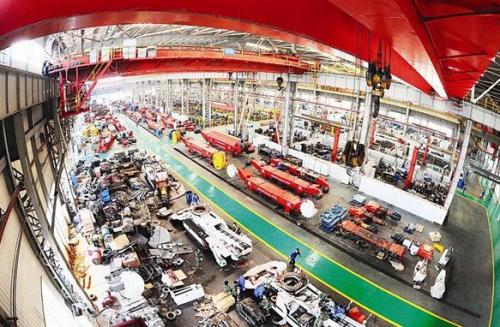 Recently, in the list of the 36 industrial agglomerations of the 5th batch of â€œNational New Industrialization Demonstration Baseâ€ announced by the Ministry of Industry and Information Technology, the equipment manufacturing industry cluster in Dalian Jinzhou New District has achieved the advantage of intelligent equipment manufacturing.

As the equipment manufacturing industry of Dalian's pillar industry, after many years of adjustments in structure and technological innovation, it has formed the advantages of intelligence and greenization, especially some high-end products. At the same time as replacing imports, it has not only gone abroad, but also has been affected by some European and American countries. The favor.

Industrial agglomeration is the foundation

Dalian Guangyang Science and Technology successfully developed the key functional components of the second-generation full-digital bus open-end high-end numerical control system and high-end numerical control machine tools in China, and was awarded the national independent innovation product by the Ministry of Science and Technology. It has been successfully applied to serial and hybrid control of domestic large aircraft assembly. For the domestic initiative. He successively undertook the national science and technology support plan, international science and technology cooperation program, national science and technology major projects such as "high-grade numerically-controlled machine tools and basic manufacturing equipment", especially in the special implementation of CNC machine tools, Guangyang undertakes and participates in the numerical control system, servo drive, torque Five topics, such as motors, double pendulum milling heads, and turning and milling machine tools, are the first of their kind in China.

Dalian Tianyuan Electric Co., Ltd. has independently developed a series of large-capacity wind turbine generators and realized industrialization. It has been listed as a major equipment project and a key new product by the National Development and Reform Commission. It has independently developed an offshore explosion-proof motor to realize industrialization and its products have reached The domestic advanced technology level fills many gaps in the country. In particular, it has pioneered the development of drive motor products for energy-saving and new energy vehicles in China, and its technical level has reached the domestic level. The independent research, development and manufacturing of 3 megawatt wind turbine products have filled China's model production gap.

Firstly, through the continuous improvement of information infrastructure, the New District has established a three-dimensional communication infrastructure network and a good investment opening environment covering the whole region, which has enabled many well-known companies at home and abroad to set up R&D centers and products in the new district.

The second is the deep integration of â€œtwo kinds ofâ€, which has greatly improved the production efficiency of the company. Through the introduction of the ERP production management system, Dali Pump Industry has established a centralized and unified operation management platform, production operation management platform, office management platform and network infrastructure, and achieved a phased leap from decentralized to centralized information construction. The application of SAP software marks the company's full use of information technology to transform traditional industries, promote information technology to promote industrialization, and form a development trend in which information and industrialization support and promote each other. The implementation of this project won a state capital grant, and won the â€œSecond Prize of the Dalian City Information Promotion and Application Excellence Projectâ€.

Third, informatization has increased the added value of products. As the IC industry continues to grow, embedded software, industrial software and microelectronics equipment have been fully applied to products, which has increased the level of equipment automation and intelligence, and has been applied to the industrial chain in the fields of CNC machine tools, wind power, and nuclear power equipment. The high-end upgrade exploration has focused on the development of a number of high-tech and high-value-added products, making the industry and product structure more rational. Dalian Machine Tool Group has accelerated the R&D and production of more than 10 series and more than 300 varieties of new products, leading the leading products to occupy the leading position in the industry and ranking among the top 5 in the world machine tool industry. The five-axis (multi-axis) numerical control system developed by Dalian Machine Tool Group and Koyo Technology began to equip domestic CNC machine tools.

Around the automotive industry, many service supporting industries have gathered.

Fifthly, the integration of â€œtwo industriesâ€ has increased the level of informatization of industrial clusters and promoted the development of related industries. In order to promote the deep integration of informatization and industrialization, under the guidance of the Municipal Economic and Information Technology Commission, the New District has integrated its internal resources in recent years. It has organized and implemented the â€œconvergence of traditional industries and IT companiesâ€ around the key industrial clusters for equipment manufacturing, and implemented two-way support. The policy has resulted in the promotion and application of a number of independently-innovated products in machine tools and other industries. It has successfully signed over 30 cooperation agreements worth nearly 100 million yuan. It not only helped strengthen and expand a number of software companies, but also greatly reduced the threshold for capital investment in information technology for equipment manufacturing enterprises. It also provided strong support for accelerating independent innovation, adjusting industrial structure, and promoting industrial upgrading, thus forming an informatization application. The good development of interactive development of the information industry.

Gantry cranes are widely used when the lifting is needed without the cost of a building or support steel work. The gantry cranes can be placed indoors or outdoors, used for activities in steel stock yards, pre-cast segment yards, construction sites and other outdoor application.
Gantry Crane advantages
Gantry cranes with the runway located on the floor can be used where the Overhead Crane or bridge is not practical.
Gantry cranes are more cost-effective comparing with the overhead crane system.


Gantry cranes have a wide application. Gantry can be used indoors and outdoors. Gantry cranes can be used when the existing factory structure which cannot bear the wheel loads of the overhead crane; or loads needs to be handled outside the crane span and when the relocation of the crane is required after the work at a certain site is completed.